A wrenching, highly personal and deeply moving story of a family in crisis,
MY DAUGHTER/MYSELF is a testament to the powerful and universal bonds of the mother/daughter relationship.

By turns a medical mysery and a family drama, the book chronicles Wolfe's thirty-eight-year-old daughter's out-of-the-blue, near fatal stroke and the fascinating process of physical and mental rehabilitation that allowed her to make an astonishing recovery. Wolfe makes vivid every agonizing moment, from the disastrous mistakes of some doctors and the miraculous intercessions of others, to the terrors that haunt the young children of an illness-stricken parent, to the painful, inevitable -- and sometimes funny -- disputes that arise when a mother-in-law and son-in-law must share the same roof, and the innumerable struggles and difficult choices that face the young stroke survivor. 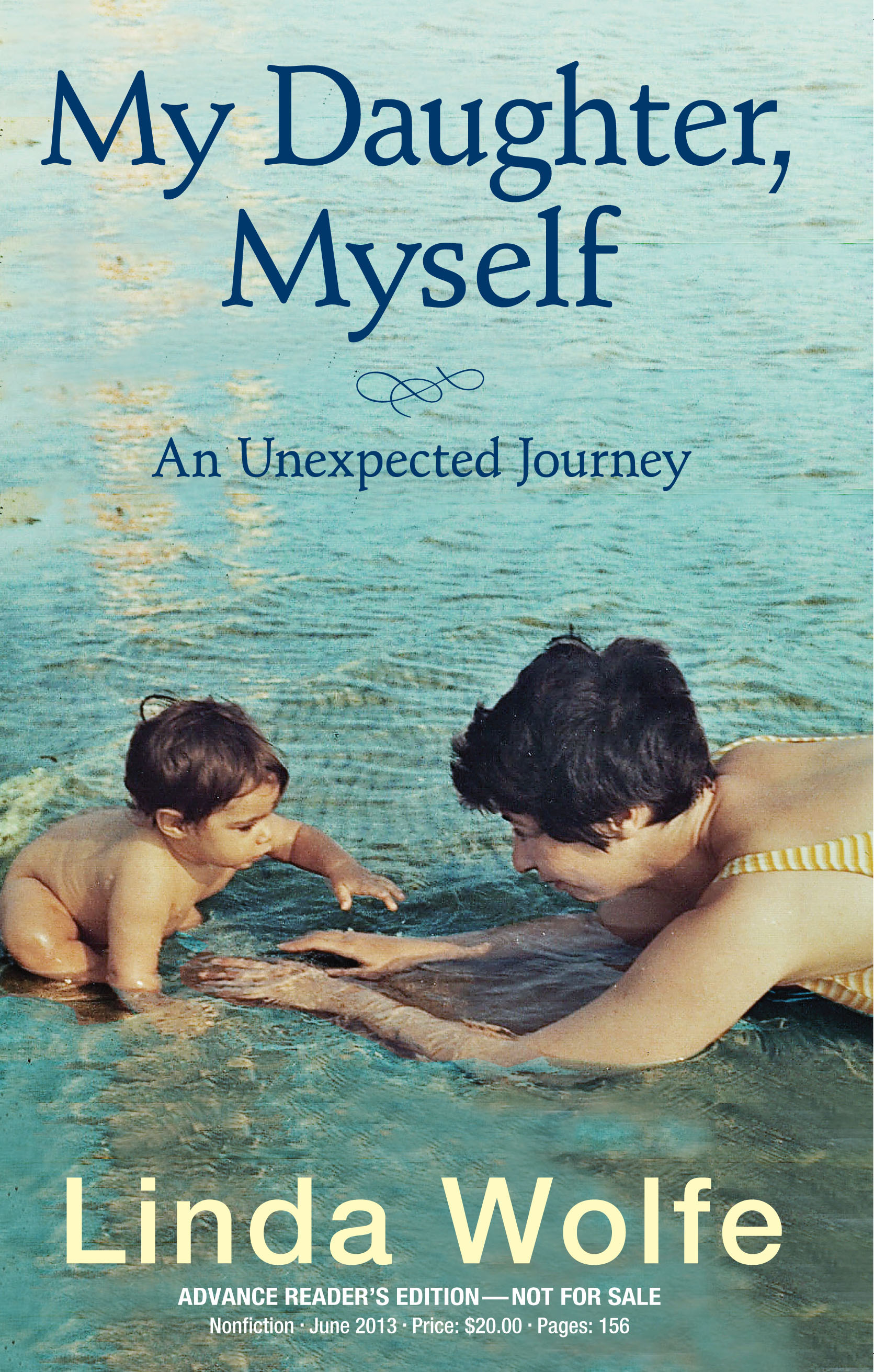 MY DAUGHTER, MYSELF: AN UNEXPECTED JOURNEY

A riveting and intimate memoir about the near-fatal stroke of Wolfe's 38-year-old daughter and her remarkable recovery, replete with insights into the passions and perplexities of the mother-daughter bond. By turns a medical mystery and a haunting family tale.

Linda Wolfe's harrowing and moving account of her family's crisis is an intensely personal testament to the universal mother/daughter bond.

Linda Wolfe is such a terrific writer that even during the scariest, most heart-stopping passages it's a pleasure to read this triumphant story of a precious daughter's stroke and recovery.

— Alix Kates Shulman, author of Memoirs of An Ex-Prom Queen

“Linda Wolfe is a superb journalist and a fine novelist and critic, but she
has surpassed herself with this eloquent and gripping memoir about her
daughter’s near brush with death. A must read—I could not put it down.”
— Patricia Bosworth, author of Anything Your Little Heart Desires:

“Engrossing. Moving. Powerful. This account of a daughter’s debilitating
stroke and arduous recovery comes from a place of intense fear and
helplessness, and by looking as much inward as outward, Wolfe tells an
utterly human story of unexpected resilience: her own and her daughter’s.”
— Ron Franscell, author of The Sourtoe Cocktail Club

" …. My Daughter, Myself reveals Linda’s exceptional ability to look as much inward as outward. While Linda learns the foreign language of hospitals and illness, she also learns how to translate her and her daughter’s feelings and actions. Just like the flesh and blood Linda [Wolfe] I know, the Linda you meet in the book is funny, passionate, insightful, a brilliant observer and a font of information about a serious medical issue that affects 1 in 1,000 people 45 and younger. "
—Geri Brin, Fab Over Fifty

"In this well-written, emotional memoir, veteran journalist Wolfe tells the every-parent’s-worst-nightmare story of how her 38-year-old daughter, Jessica, got a massive blood clot in her brain. Along the way, Wolfe weaves in important health information about strokes, the fourth leading cause of death in the U.S. . . . Fortunately, Jessica—the married mom of two young daughters—lives and regains her ability to walk. . . . Lively and easy to read, this is an honest, compelling, and instructive medical tale."
— Karen Springen, Booklist

A searing account of a daughter's physical and mental rehabilitation, "My Daughter, Myself" reminds us of the fragility of life and the powerful, primal cord that binds a mother to her daughter.  . . .    Compelling, heartbreaking, and down-to-earth . . .
— Jill Bialosky, East Hampton Star

What are surely two of Linda Wolfe's strongest instincts -- maternal and journalistic -- come together in the inspirational memoir of her daughter's battle with a nearly fatal stroke.

"My Daughter, Myself: An Unexpected Journey" follows in the footsteps of other gifted writers who've worked through their anguish as parents doing what they do best professionally, such as Isabel Allende's "Paula" . . .  and David Sheff's "Beautiful Boy: A Father's Journey Through His Son's Addiction."
—Agnes Torres Al-Shibibi, The Seattle Times

THE MURDER OF DR. CHAPMAN The Legendary Trials of Lucretia Chapman and Her Lover

"An affecting portrait of a desperately romantic woman and an audacious, inept con man."

"An absorbing account of a scandal that galvanized public attention....In telling the story of Lino and Lucretia, Wolfe unveils the hidden worlds of deception and lust in antebellum America, worlds that writers such as Herman Melville and Nathaniel Hawthorne would make a staple of their fiction."

"This is a book a reader hates to finish because there is so much to savor on every page."

"Linda Wolfe captures the tenor and texture of the times, the prevailing moods and opinions, and delivers them to the reader without breaking stride."

"Wolfe has always been a keen observer of contemporary true crime; here she has delved deeper into history to disinter a quintessential con man who cut a wide swath along the eastern seaboard."

"From the dust of the archives Linda Wolfe has recovered a terrific, gripping story of a wily con man, a woman's fall from grace, and a ghastly crime. Wolfe recreates the 19th-century world in vivid detail and with moving, skillful prose, brings these tragic characters to life."

--Henry Wiencek, author of An Imperfect God: George Washington, His Slaves, and the Creation of America

"The Murder of Dr. Chapman reads like the best sort of literary thriller....Connoisseurs of sensational trials, from O.J. Simpson to Claus Von Bulow, will surely not want to miss this one, which was made for Court TV, had it existed in the nineteenth century!"

"Linda Wolfe has somehow put us as closely in touch with the manner and sensibility of a serial killer as we are ever likely to be."
--Bruce Jay Friedman, The New York Times


"Linda Wolfe has written yet another spellbinding tale...Double Life is such an intimate portrait that I felt like a voyeur -- but could not stop until I finished the last page."
--Ann Rule

WASTED was a "New York Times Notable Book" and was nominated for an Edgar.

"A thoughtful and unsensational book about a thoughtless and horrifying murder."
--Mademoiselle


"[A work of] breadth, subtlety...fierce intelligence."

THE LITERARY GOURMET
Menus From Masterpieces

A culinary classic, the award-winning The Literary Gourmet is a collection of dining scenes from the masterpieces of world literature, accompanied by historically-accurate recipes that were tested in the kitchens of New York's Four Seasons restaurant.

MY DAUGHTER, MYSELF: AN UNEXPECTED JOURNEY

THE MURDER OF DR. CHAPMAN The Legendary Trials of Lucretia Chapman and Her Lover

History, mystery, and detection -- a stunning work of historical imagination.


LOVE ME TO DEATH
A Journalist's Memoir of the Hunt for Her Friend's Killer
A deeply personal and affecting memoir that unmasks a deadly Don Juan.